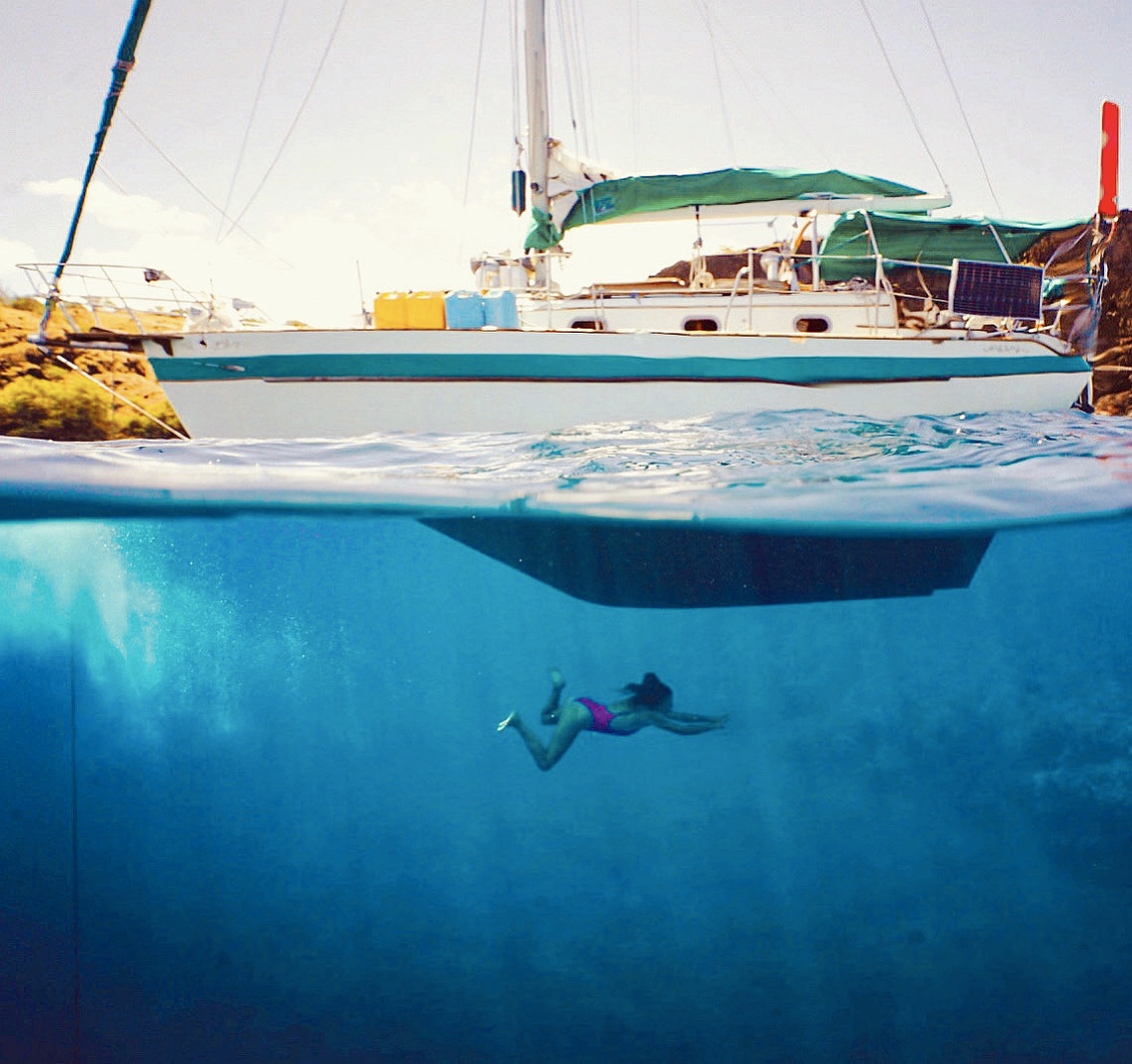 Ok I’m gonna fess up, the day we left Molokai we made a mistake. It was a big one that took 5 or so hours to fix.  It involved the engine and coolant and oil and sleepy brains that were still in the realm of the subconscious.

And that’s what held back our departure.

I skimmed over this fact previously because it seemed too foolish to share. But now I don’t care if you know.

Anyway, we thought the coolant was low, but we weren’t looking at the radiator when we checked it, we were looking at the oil tank! So we poured a bunch of coolant in the wrong tank. And realized only after it was filled to the top and oil bubbled out, that we had messed up.

We left that harbor with 10 gallons of engine fluids in water jugs, a pile of dirty rags, barely used filters, and a bilge that smelled sour.

We were all high on fumes by that point.

Sava named the engine Deirdre after that. He says it’s the name of a great aunt. I imagine it’s the kind of aunt that gives you wet kisses that stain your face with unwanted red lipstick. The kind of aunt that licks her fingers then touches your hair to fix your frizz. The kind of aunt who wears pajamas all day and eats popsicles for breakfast because she doesn’t have any teeth left and she can’t be bothered to change her clothes, but she sure as hell will tell you what you should eat and wear.

Deirdre isn’t alone, everything on Juniper has a name.

I think our mishap with Deirdre, might have been a blessing in disguise. The wind was pissed that day and we were dancing around so hard at anchorage that we busted through my anchor bridle line. Chewed it straight down to the core.

When we left the, The Kalohi Channel, that rests between Molokai and Lanai was nasty. White caps everywhere. We were getting bitch slapped by waves left and right.

The wind ripped Juniper’s bimini into wings that fluttered. So Sava named her Angela, because she seemed so angelic afterwards. And the jib started popping her seems everywhere. She doesn’t have a name yet, but I’ll name her right now. I’ll call her Janice. And Janice is the kinda gal whose too big for her britches. You can see everything she’s got going on down there and I mean everything! Every freeway, every twist, every curb, every stop sign.

The sun and the wind makes everything fall to pieces here in Hawaii. And I worry about me. Will I turn from a plum to a prune if I sail these waters for too long?

The sail to the leeward side of Lanai was quick, we were on a close reach and moving fast. 6 knots, often more. It was only a three hour journey in the end, but a heck of a lot happened in that short amount of time and it felt like we were out there for years. Like lost at sea, drinking fish blood, and longing for the scent of an island. Dirt will make ya melt after weeks of not smelling it.

We anchored in Kaumalapau Harbor an hour before sunset. That harbor was built for ships to transport pineapples and the north side of it is a factory. When we arrived kids were jumping in the water while their fathers drank beer on the sea wall. Forklifts drove objects back and forth, from one place to the next. The factory seemed passed its heyday and the everything about it felt faded.

We anchored on the south side, which is untouched and full of trees. I thought about all of the deer roaming through that  greenery. They were a gift for the king that turned into a pest.

I know a lot of good ole’ boys with red necks, who’d be stoked to get paid to hunt and kill all the pests in Hawaii- mongoose, deer, cats, cattle egrets, rats, barn owls, etc.

Anyway, it wasn’t the most picturesque anchorage I’ve ever seen. Not by a long shot. It was as if we anchored in the middle of the rust belt and I was some coal minors daughter looking to thumb her way somewhere- anywhere- but there.

Sava and Josh had heard the coral there was popping. So we immediately jumped in with masks and fins.

They are mermen. Watching them dive is like watching a man fall from outer space. It makes you marvel at the way humans can move beyond their humanness- swim straight past it- and into the realm of nymphs and gods and unicorns and pixies, until they are a flat out fairytale.

They can each dive about 200 feet and stay under for 2 some odd minutes. I roam the surface and catch turtles on their way up for air.

That harbor wasn’t much to look at up top, but the underwater seascape was out of this world. It was like a flooded forest realm made of rainbowed coral and fish of every shape and color. There were caves and sharks and bubbles and crabs and lobsters and reflections of the sun that I wanted to swallow.

We made green curry for dinner that night and took it easy.

Then we hoisted anchor and headed to Manele Bay.

There wasn’t a slip for us so Sava dove and grabbed a mooring ball just outside the harbor. We were rocking and rolling so hard there that we ended up dropping the hook.

The harbor master at the marina, who was either as sweet as pie or wanting to avoid us from going ashore, offered to pick stuff up for us in town and bring it to a loading dock.

The guys said there are three essential sailing needs and they all start with B; beer, bread, and butter. We already had the fresh bread that Josh made so we requested the other B’s from her and hunkered down for the night.

It was a sleepless night. We were thrown from starboard to port violently every other second.  In the morning Sava said, “I feel like I went out last night and just got home after doing a bunch of regrettable things.”

There’s this thing called a Flopper Stopper, that helps you rest easy on a rolly anchorage. You hang it off the boom. Someone gave me one, but it’s so massive and heavy I had to get rid of it. I’m sure I might regret that decision one day, but all my cruiser friends said they got rid of theirs for the same reason. There’s just not room for everything aboard a boat. I like living with spacial limitations a lot. It helps break life down to the essentials.

That’s my life now. I’m a nomad, wandering and floating around with the bare essentials.

* A few more interisland posts to follow. The three of us set sail on July 7th for the Tuamotus in French Polynesia. I will write daily from sea. I am going to create a new password for the journey. If you donated after I landed in Hawaii or donate on a monthly basis, I will automatically send you the new password. If anybody else would like to follow along send any amount you feel for access to the new tracker password. This helps me continue life at sea. Sending you all salty kisses and love and all that Jazz!

3 Replies to “The Pineapple Isle”