She’s sailing solo around the world aboard, Juniper, a 34 ft. cutter-rigged sloop that’s haunted by a dead man’s ghost. Her mainsail has a panda face on it and her boyfriend is a seabird named Pluto.

In the summer of 2019, she single-handed from San Diego to Hawaii. She has since sailed to French Polynesia, and is now floating around Fiji.

Olivia’s journey is guided by humpback whale migration patterns. Follow along as she wanders the seas in search of art and magic.

Captain Olivia O Wyatt was born and bred in Little Rock, Arkansas and has traveled to more than 25 countries in search of passionate storytelling and adventure. As a filmmaker, she makes ethnographic films that focus on preserving the traditions of communities that are on the brink of extinction as well as creating abstract works of a psychedelic nature.

She is a member of the Sublime Frequencies collective and recipient of a Studio 7 Arts grant. She has made three feature-length films. Her last one, Sailing A Sinking Sea, premiered at SXSW, won the audience choice award at the Singapore International Film Festival, and recently screened at the Smithsonian Institution.

This is Far From Over 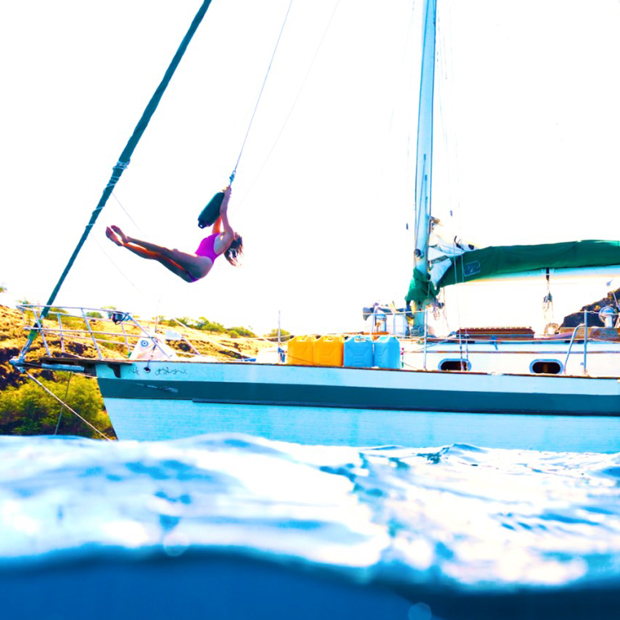 Sailing Solo in Search of an Endless Sunrise

THE ROCK, THE WHALE TOOTH & THE CACTUS MOON

I’m so obsessed with this memoir “Chasing Drea

Turtle playing under Juniper. According to PBS, tu

This is my new boat flag. I’m obsessed with fish

Fish Medicine; staring at fish can drop your blood

This is what Juniper looks like sailing close to a

Items I wouldn’t sail solo without: 1. Self Ste